Comments: Emily G spent 2 months each in an Amazon warehouse, an AT&T/Convergys call center, and a McDonalds and compiled her experiences and observations in a fantastic book.

Insights that resonated: The one idea that I kept coming back to was a recognition of the privilege in my life. I get to get a steady paycheck solving puzzles that are sometimes challenge, occasionally difficult, but never hard. However, the average hourly worker’s life is the exact opposite – an unsteady paycheck and a hard job.

There are many memorable anecdotes that will stay with me – customers throwing coffee and sauce at McDonalds, getting hourly pay deducted for a bathroom break at Convergys, chugging free pain medication at Amazon, Amazon colleagues doing a DIY root canal at home to avoid missing work and paying a dentist, among others.

It made me ponder the effects of global trade and technology while also considering the possibility of Universal Basic Income.

With every one of these books, we may not agree with everything the author says. That’s expected when you’re attempting to synthesize thousands of years of human history. But, these books are worth reading because understanding what came before us helps put into context what we’re experiencing today.

And, every once in a while, they also helps provide clues about what might lie ahead. History doesn’t repeat but it often rhymes.

1. The notion that money began because of barter is a myth. Barter is simply a logical sounding story made up by economists. To understand money, we need to look at credit/debt.

2. It is fascinating how there were similar arcs of progress in different places around the world. As different as these people and places were, there were still strong similarities in the way civilization progressed.

3. While luck plays a massive role in our lives (determines ~70% of our outcomes by my estimation) today, that role was even arguably larger (>90%) in the past. If you were born in the wrong family, you were stuck, screwed, or likely to die a brutal death.

Comments: This is an interesting book because it isn’t about how to invest or how to think about money. Instead, I describe it as a book that is about how to think about thinking about money. It is a collection of stories and anecdotes that you’ve likely heard of before and that provide food for thought. And, it can either be a light heavy read depending on how you’re feeling.

I walked away with a list of questions that I intend to work through in the coming days. It made me think. And, for that I’m grateful.

1. Our savings = Our earnings – Cost of essentials – Cost of our ego (all expenses related to looking good)

2. Manage your money in a way that helps you sleep well at night.

3. Luck and risk in complex systems explain outcomes better than deliberate action. Respect them. Then do what you control.

4. The key with compounding is to not interrupt it. 99% of Warren Buffett’s net worth came after his 50th birthday, and 97% came after he turned 65.

5. Luck and risk in complex systems explain outcomes better than deliberate action. Respect them. Then do what you control.

Comments: Interesting compilation of how endowment managers of the best Ivy league endowments manage their money. Very applicable to personal investing and offers a sliding scale of actions depending on how actively you want to manage your money. 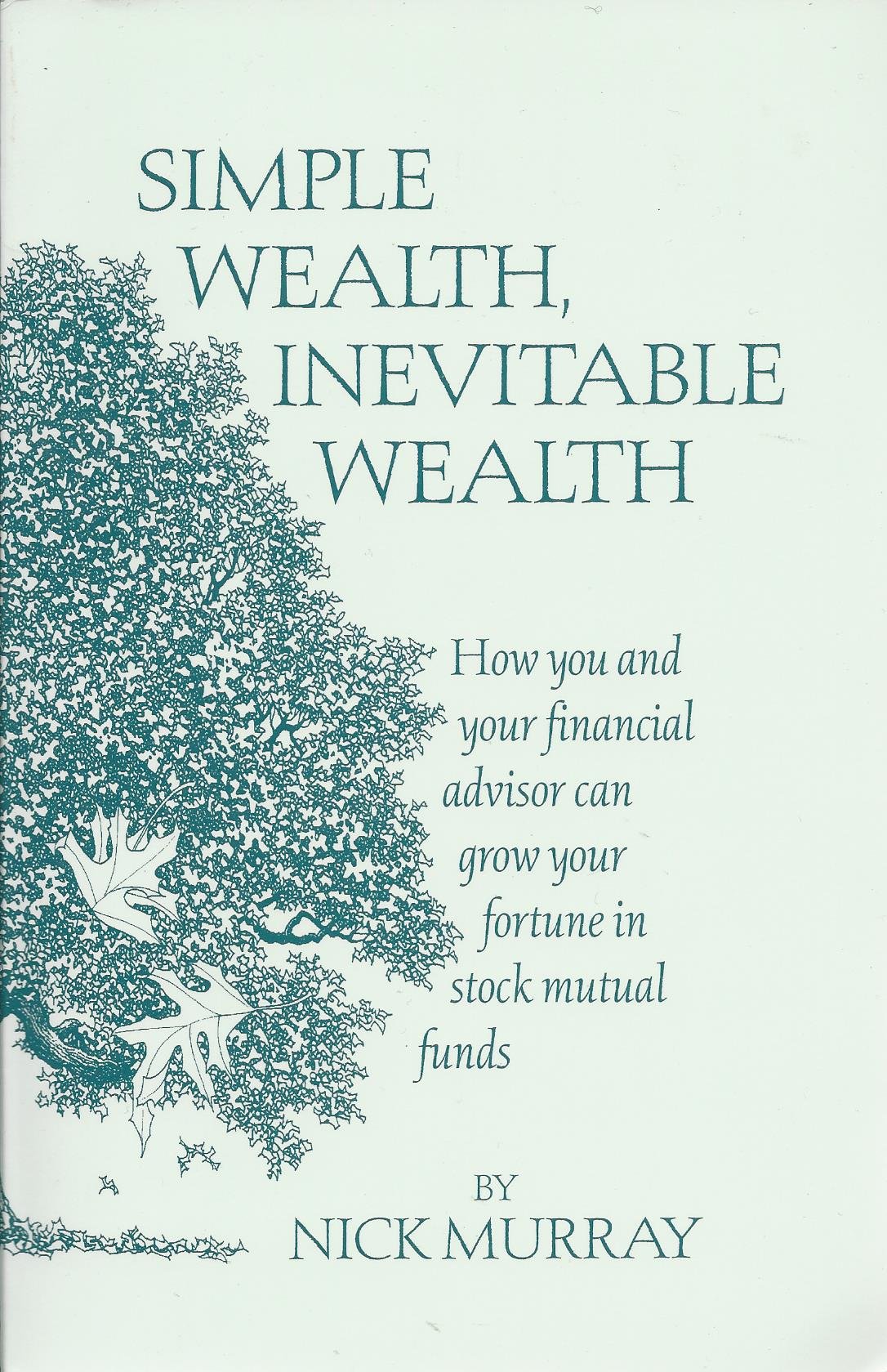 Comments: I am a fan of personal finance and investing books and enjoy reading one every year or so. For the most part, they serve as a nice reminder to me to be thoughtful about saving and investing. This book was particularly interesting because Nick Murray makes a strong case for working with a financial advisor. This is contrary to nearly every other famous investing books. Nick is biased by his own experience as a financial advisor and author of books for financial advisors of course. But, he is upfront about those biases. While it didn’t result in me engaging in an advisor, it inspired me to speak to one. While it was definitely not the right time, I might still end up taking his advice some day in the future. He also hammers home the point that ownership (via stocks) is the only route to wealth.

Comments: The Only Investment Guide You’ll Ever Need was a recommendation on Seth’s blog. I picked it up at a time when I needed a bit of a refresh on all things investments since I’d taken all money off indexes to pay for graduate school. It was nice to “get back” with this book and, as with all Seth recommendations, this didn’t disappoint. It definitely lives up to its name as the “only” investment guide you’ll ever need. It is witty, smart and worth following.

If this topic interests you, do check out a learnographic I co-created here.

1. A penny saved is a lot more valuable than a penny earned. The quote from Benjamin Franklin was from a time when there were no taxes. Now that we live with taxes, it actually takes a lot more than a penny earned to save a penny. So, spend less than you earn, save and watch it grow. This is a lesson that has stuck with me since the book.

3. Keep short term money somewhere safe and convenient. Then, invest long term money in stock indexes where you must buy low, buy low, buy low. This is opposite what everyone else does. A simple vanguard index will outperform everything else in the long run.

I would still recommend reading 2-3 investment guides before you zero in on your investing strategy. That is not because the advice in the only investment guide is any different. However, if you haven’t been exposed to this world before, it is reassuring to see the same principles at work everywhere.

Comments:  If you have any interest whatsoever on the financial markets, this book is a must read. If not, well, put it on your shelf. Michael Lewis’ books are like art – you’ll never tire of flipping the pages. He makes  a heavy financial book feel like a fascinating novel.

1. Every time a new regulation is put in place, it creates an unforeseen set if market conditions that inevitably results in arbitrage by those looking to game the financial system. This sort of quick money scheme repeats itself – the housing bubble in the 80s, the credit default swaps in early 2000s and then high frequency trading in the late 2000s and perhaps now.

2. Such arbitrage causes billions of dollars to move from the pockets of investors to middlemen.

3. The behavior of the big Wall Streets bank is shocking. That’s not to say the people in these banks are bad. Somehow, the incentives and existing cultures result in horrible short term decision making. (I can’t help but wonder if the system of reporting earnings every quarter does more harm than good. It seems to drive short term thinking everywhere!

Comments: First, let me get the obvious out of the way – yes, this book isn’t perfect. It can be very simplistic at times and the writer does have a clear political agenda against the US government’s financial policy.

Now that I’ve said that, this book is a must read for everyone. I say everyone because we all deserve to understand how an economy works. The authors lay out the principles of economics and call bullshit on the idea that micro economics is essentially different from macro economics. They do it by taking us through the growth and crash of an island’s economy (and do this with lots of digs at the US-China relationship. The islands are called Usonia and Sinopia :))

Fantastic book. It points to a scary conclusion – the whole idea of a paper currency anchored in nothing but trust is a massive experiment and one that could result in mass default and failure.

The reason governments take on so much debt is because the economic policy is driven by political agenda. As a result, instead of taking the hard decisions and cutting public spending, the government always attempts to take the easy way out by printing more money.

2. Deflation is not a bad thing. Deflation means productivity is increasing and things are getting cheaper. This means it is time to allocate resources to new investments – the technology industry is a good example of this. The American economy was deflationary until the 1930s when Keynesian economists came along and said inflation is the way to go. This has resulted in economists insisting that inflation needs to be maintained. When you hear that, ask why.

3. American consumption has been lauded as a strength. Well, it is not. Production is a strength. Consumption is not. An economy’s strength is built on savings. It is because of savings that interest rates fall and allow for cheaper credit and cheaper investments. America is surviving on the fact that China is hugely invested in it and the fact that it’s currency is global reserve currency. Things could fall very quickly (ominous, I know)

My summary of the full book is on The Bookbytes Project.

Comments: This was a really good read. I have to say this about all Michael Lewis books. His books are a real lesson in writing. He really takes you on a journey with him and beautifully extracts the insight out of it. He doesn’t do many interesting stories and anecdotes. Instead, he runs a few stories in parallel bringing out a central theme or insight. Just fantastic.

Boomerang is about his travels in Europe following the credit crisis. He explores what Iceland,  Greece, Ireland and Germany did with the explosion of cheap credit.

1. It’s hard to do the right things when conflicts of interest are afoot. Banks, for example, employed analysts who were supposed to give an unbiased view of the markets. However, in the case of Phil Werner, who predicted the Irish property bubble, this didn’t work in practice because Merrill Lynch’s angry clients were the banks who were behind the property bubble.

2. It’s amazing how quickly old financial institutions let go of traditions when a new upstart comes in with a ridiculous idea that seems to make money.

Anglo Irish Bank was that upstart. A property developer could practically walk in the morning and walk out by afternoon with 100s of millions of euros. Soon, all Irish banks had divisions which paid their staff based on the amount of money they lent (talk about bad incentives). Allied Irish even had a department called ABA – anybody but Anglo with salespeople focused on poaching anglo’s customer.

3.The effect of cheap credit had different effects in different places. Americans decide to use it to buy houses they couldn’t afford. The Greeks decided to use it to fund a lifestyle that was definitely beyond their means. The Irish used it to buy more of Ireland from each other. The Germans behaved responsibly within but went crazy in enabling everyone else. In fact, the Germans were the ones who bought all crap assets until the very end. The followed the rules and took AAA rated bonds at face value to devastating effects

Comments: Liar’s poker was a quick breezy listen about Michael Lewis’ 2 years at Salomon Brothers in the 1980s. He tells it as it is and walks away after 2 years at the end of which he’d made about 400,000 dollars just out of school.

The experience clearly had an impact on Lewis as he’s gone onto write about one Wall Street head fake after another calling for tougher action and more regulation on the industry. Interestingly, while he wrote this book intending to keep people away from investment banking, he revealed later that he received one thank you note too many from trader hopefuls who said his book really inspired him.

Not a book you get tons of specific insights from but definitely one that gives you insight into what still is a very sought after industry for its ability to make people rich.